HOWTO: GSM Base Station with the BeagleBone Black, Debian GNU/Linux and a USRP

The BeagleBone Black (AKA BBB) is a small, 1GHz ARM Cortex-A8 computer with a powerful NEON accelerator, many pin-outs (65!) and great power handling. In this HOWTO we’re going to use it as the core of a cellular base-station that can interact with mobile phones/handsets; manage calls between handsets, interface between handsets and SIP, sending SMSs, etc.

Why the BBB and not a Raspberry Pi? While lacking the graphical processing power of the R-Pi, the BBB is significantly faster and as such better suited to high-I/O applications like (small-footprint) cellular infrastructure. More so, unlike the R-Pi, the BBB has 4Gb of on-board storage, doing away with the need for an SD Card to boot. This makes the cost of getting setup with a BBB more or less the same as that of a R-Pi but with notably better overall performance (for most applications).

A BBB can be powered from standard 5v DC or with Mini-USB. The advantage of the latter is that during development a USB Ethernet interface can also be created, allowing command-line users a convenient way of working with the board - you get both power and network connectivity over a single USB cable. 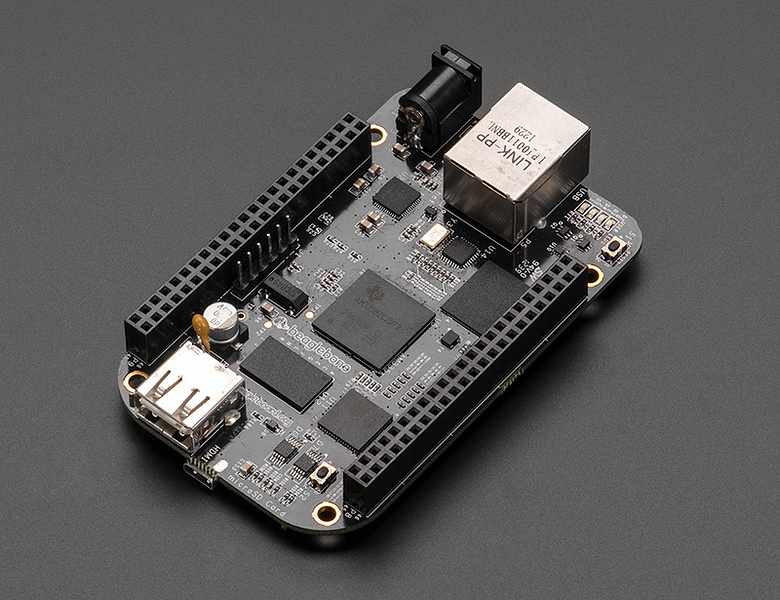 For an example of using a DIY BTS in a Critical Engineering context, see PRISM: The Beacon Frame.
For code relating to that project, see Documentation of GSM spoofing strategy used at Transmediale, 2014.

This HOWTO assumes certain pre-requisites are taken care of.

First you need a 4Gb or more MicroSD card. Stick it into your laptop, open up a terminal and type dmesg. Look for “mmcblk” in the output and note it down.

In my case I see:

For this reason I will choose mmcblk0 as the device representing the MicroSD card.

Now download the Debian image that we’ll use to flash onto the card. Now cd into a familiar place on your operating system (like /home/you/Desktop) and:

Now we can dd it onto the MicroSD (note that I use mmcblk0 - yours may differ!):

When done take it out of the laptop and plug it into the unpowered BBB. Plug in an ethernet cable connected to your Internet gateway. I like to have both laptop and ethernet cable on a switch for this next part.

Find a mini-USB to USB cable. Plug the USB end into your laptop.

Now hold down the “Power” button and plug in the mini-USB end of the cable into the BBB, supplying power. Wait for the LEDs to start flashing and release. After a short while you’ll see a LED pulse go from left to right and back again. This indicate the Debian image is being flashed to the eMMC. It will take around 10 minutes and then stop flashing, with all 4 LEDs on and static. This indicates success.

Now remove the Mini-USB cable from the BBB, take out the MicoSD card and plug the Mini-USB jack back into the BBB.

Above information resourced from here.

Configure network between BBB and laptop

Type ifconfig -a on your laptop and you should note a new Ethernet device. In my case it’s labelled eth5. This is an Ethernet over USB device that you can use to connect directly with your BBB.

Ask for a lease from the BBB:

Now ssh into the BBB:

You should now be logged into the BBB and able to start updating.

First, check you are online with the BBB with a simple ping criticalengineering.org. It should’ve been granted an IP by your DHCP server on boot. If not, ask for a new lease.

Click on this link on your laptop and find the latest stable (non-rc) kernel for the BBB. In my case it is v3.15.2-bone2. Right-click on the link for the file “install-me.sh” and copy it to the buffer.

Now on the BBB (not on the laptop) download the file using wget, pasting the link you saved above into your terminal (note my URL may differ from yours):

When done, you’ll be asked to reboot the board. Once it’s booted, log in again and type uname -r. It should report you have a new kernel version.

Once installed, type the following to clear out all the downloaded packages from the cache, recovering precious disk space:

Now plug in a blank USB stick (or another blank MicroSD card) with more than 2Gb of storage into the BBB. This we’ll use to host the OpenBTS, OSMO-TRX and UHD code repositories.

Type dmesg and note the device in the output. In my case, an 8Gb USB stick appears as /dev/sda1:

As the user debian, create a mount point called src in the home directory of the BBB:

Now we mount it, in such a way that our user, debian, can write to the mount point:

Compile and install UHD, our interface between the BBB and USRP

cd in and create a build directory:

The below command will build UHD for a USRP B200 (and thus B210), omitting documentation and manpages to preserve eMMC storage space.

Now go and do something entirely unrelated and come back in an hour. Hopefully you’re greeted by sudo asking you for a password needed for install.

The Transceiver52M that ships with OpenBTS is unusable on the BBB. For this reason we’ll install an alternative transceiver called osmo-trx, written by the fine folks at OSMO-COM.
Fetch and build osmo-trx

Check out OpenBTS and compile

OpenBTS is the software that provides us with the software part of a cellular station. It allows us to control the transceiver, manipulate our cell station, interface with SIP (for calls and SMS) and all sorts of other things. Importantly we won’t install the OpenBTS applications that are built in the process, rather choosing to place them in a folder in /home/debian/bin.

Ensure you’re in the /home/debian/src directory.

Check out OpenBTS with subversion:

We need to compile and install a53 first:

We need to edit a Makefile to represent the correct architecture. While the rest of OpenBTS is fine, the Transceiver component (which we actually replace with osmo-trx) is not. I didn’t find a convenient way or disable the Transceiver52M component. It was easier/faster just to make this one small change to finish the compile:

In the file ~/src/openbts/openbts/trunk/Transceiver52M/Makefile.in, change the line that reads:

Now move into the OpenBTS trunk and get building:

Now go and learn an endangered natural language, take up horse-back archery or go to Micronesia in search of a rare, carnivorous and aquatic snail. On your return OpenBTS may have compiled.

This db holds the runtime configuration of OpenBTS:

Copy over a database for sipauthserve to work with:

Smqueue needs a database for messages in and out of the system:

You can now unmount the storage device you used to hold the source code we compiled and remove it from the BBB. We don’t need it anymore.

Now plug in your USRP. You may need to power the BBB from DC as USB power will likely not be enough to drive something like a B200!

Wait for it to report that the transceiver is up and running. Once it is, SSH in with another terminal and type the following:

Wait for OpenBTS to report that it’s running. You should see something like:

system ready
use the OpenBTSCLI utility to access CLI

Take out your phone and search for networks. You should see a 00101 network. Now start the OpenBTSCLI:

Type ‘help’ to see available commands. Interesting commands to immediately familiarise yourself with are:

config <-- dump or set the configuration of your BTS
tmsis <-- list IMSIs attached to your BTS
rxgain <-- list or set the gain, in dBm, of your BTS
sendsms <-- send an SMS to an IMSI

For instance, to allow for automatic registration, use the following command (warning, your neighbours may connect automatically!):

A natural next step would be to install Asterisk, turning your BTS into a fully functional PBX or communications server. That way people can make calls through your BTS and onto other SIP addresses on the Internet from their phone.

Another would be to write shell-scripts to automate the start up process. I like to write scripts that are started in /etc/rc.local and poll ps intermittently to ensure OpenBTS and/or osmo-trx are still running. 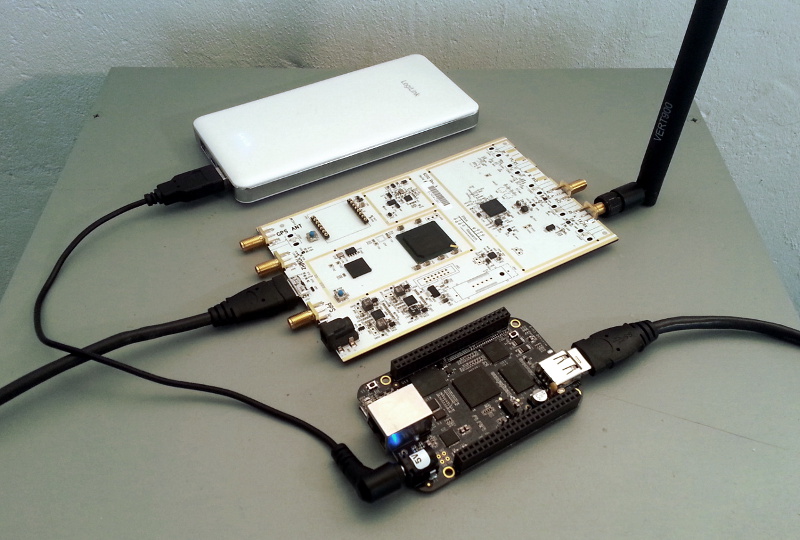 I followed this step by step. I am able to see the network 02-de but not able to register any phone with any sim, i’ve even restored to using old plain GSM simcards instead of the UMTS ones. Have been stuck for past few days on this issue. Would really help if you could help out. Thanks.

Are you starting smqueue and sipauthserve before OpenBTS? Check they are up and running as registration will not occur if you have an issue there.

I am getting this error:

This program built for arm-unknown-linux-gnueabihf
Reading makefiles…
Updating goal targets…
File all' does not exist. Fileall-recursive’ does not exist.
Must remake target all-recursive'. make[2]: Entering directory/home/debian/src/osmo-trx/Transceiver52M’
Making all in arm
GNU Make 3.81
Copyright © 2006 Free Software Foundation, Inc.
This is free software; see the source for copying conditions.
There is NO warranty; not even for MERCHANTABILITY or FITNESS FOR A
PARTICULAR PURPOSE.

Any help will be greatly appreciative!

i am having problems to see the 01001 test network. everything seems to be running fine, could you point me out in the right direction? i’m running a B200 with vert 900 antenna, in a virtual machine with ubuntu 14.04, openbts, osmo-trx, i get a "Transceiver.cpp:191:pushRadioVector: dumping STALE burst in
> TRX->USRP interface." output from osmo-trx

thanks for your time

Now, we wait for the next steps HOWTO: install Asterisk into ‘BoneTS’!

Hi, I’m trying to get this setup to work for my master thesis. Unfortunately the SIPEngine.cpp does not seem to be up to date, which means that the openbts won’t compile. The errors I get are of the kind:

Is it possible to get another version of the code that will compile? This would be a big help for my thesis, thanks.

Did you get it to work? I get compiling errors from SIPEngine.cpp, se my post below.

anyone got a firmware image for this with all the software preinstalled?